Since most single phase transformers have a secondary voltage of 120/240, they will be operated as a three wire system. Care must be taken in properly distributing the load as the transformer secondary consists of 2 separate 120 volt windings. Each 120 volt winding is rated at one-half the nameplate kVA rating. 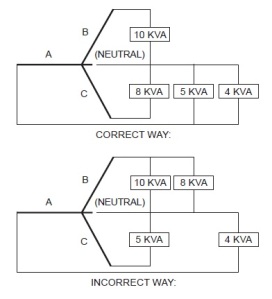 If the incorrect method is used, winding A will be loaded at 6 kVA, and winding B will be loaded at 4 kVA. These do total 10 kVA but, since each winding is only rated at 5 kVA (1/2 of nameplate rating), we have an overloaded transformer and a certain failure.